While Scotland may be the nation of castles and enchanting mysteries and legends, it is also one of the few countries with world renowned oddball games and competitions. Brits have a love for amateur competitions, but there’s nothing amateur about the following Scottish games that will surely give you a new-found respect for such competitions. These not only bring fun and enjoyment to its spectators, but show you skill and athleticism that can parallel any serious sport.

Here are 4 of Scotland’s most unusual competitions:

The first is the Swamp football Championships. Originally founded and held in Finland, Scotland started hosting this event last year, where it was first introduced in Inverness. If you are planning a visit and are looking for self catering accommodation in Ullapool or Fort Augustus we can recommend Tigh na Reultan Holiday Cottage and Aonach Mor Holiday Cottage Loch Ness. This year, the event was held in Blairmore. Having been conceptualized in 2008, it has attracted its own set of supporters and participants from all over the United Kingdom and other crazy countries. The games follow the same rules as a normal football match, but with only 6 players on the field. The match lasts 30 minutes including breaks. But the big difference in Swamp football is that the games are played on thick, slimy mud. Yes, players outplay each other, diving and slipping on wet and sticky mud, while trying to play a decent game of football. But don’t be fooled, Swamp football is more about fun rather than a serious competition, as players are highly encouraged to wear fancy dresses to add a more hilarious and light appeal. Shoes are also recommended to be taped to the feet, otherwise, players will see themselves with bare feet when their shoes are sucked in by the mud. Teams are also encouraged to create funny team names, such as the Mudchesthair United and Real Mudrid. Once the games are over you can enjoy the festivities in the campsites, pubs, restaurants and live music areas that all join in to celebrate this annual fun event. If you are planning a visit and are looking for se we recommend

If you lived close to a body of water as a child, then you’ve certainly done this to pass time and compete with your friends. In Scotland, it has become a widely played sport. The World Stone Skimming Competition is a widely participated event held in Easdale Island, near Oban, in Argyll. Every year, during the last Sunday of September, hundreds of participants and spectators head to the banks of the waters to join and watch this lively event. Absolutely anyone can join, be it a child or an adult. Each person is given three skims using selected Easdale slate stones, competing for the most and longest skims created. It is a lively event that not only attracts spectators for the game itself but also for the festivities before and after the games. A pre-skim party, barbeque, live music, stilt walking and kids activities make it an excellent event for families.

Another much participated event, which is one of only two in the world, is the Scottish Coal Carrying Championships. Held in Kelty, Fife, men and women race through the streets carrying sacks of coal on their backs. Men carry a 50 kg sack and 20 kg for women. A new category was added this year, with mascots carrying coal. This one mile race attracts thousands of spectators every year.

Lastly, involving the Scots’ most beloved traditional delicacy, the World Haggis Championship involves the hurling of a haggis as far as possible for the greatest distance and best accuracy. This skill is no ordinary feat. It requires a special subtle technique that makes you throw it to the farthest distance possible, yet giving it a gentle landing, subtle enough to keep the haggis intact and still possible to eat. It takes more than just brute force to have the skill to carry out this whacky feat.

Unusual Places To Stay In Scotland

When visiting Scotland, or any country for that matter, choosing the most ideal place to stay is one of the most difficult choices that absolutely anyone has to make. There are hotels in the middle of the city for business travelers, far away lodges, resort hotels for lovers and cheap dormitories for the budget conscious backpackers. But for those who want their accommodation to already be a destination in itself, Scotland offers some of the most unique and unusual accommodation that you wont find anywhere else in the world.

Here are four of Scotland’s most unusual and even strange places to stay:

First on the list is Sleeperzzz Railway Carriages. Sleep in a train carriage without the dizzying movement and cramped conditions of an actual sleeper. Situated in the village of Rogart in the Scottish Highlands, unused railway carriages serve as guest rooms. Around 4 to 8 people can occupy the rooms that each have their own toilet, kitchen and lounge. Open from March to September every year, this is an ideal accommodation for backpackers, families and walkers that pass through the area.

Adventure In The Meadow

For the ultimate glamping (glamorous camping) experience, Adventure in the Meadow gives you a camping experience without the hassle and inconvenience of actual camping. Located in the estate of the Kirkhill Mansion in Edinburgh, just 20 minutes away from the city, it offers wooden tents or “Cocoon” cabins that give you privacy and security from the elements. You can step outside your “tent” and watch the sunrise over the hills, circle around a bonfire at night, cook barbeque in the outdoors, gaze upon the stars and even enjoy a bath in the outdoor hot tub.

An artists haven and community, Cove Park offers lodging to its yearly retreat participants. On regular days, it offers its rooms to the public. Steel shipping containers offer sleeping and cooking facilities with spectacular views of Loch Long and scenic hills on one side. Located in a 50 acre site just 60 minutes from Glasgow, a number of container rooms have slowly been added to the estate, each with sliding glass doors that blend with its natural surroundings. Each container also has a decked balcony where guests can relax and marvel in the beauty of the lake and its landscape all to themselves. 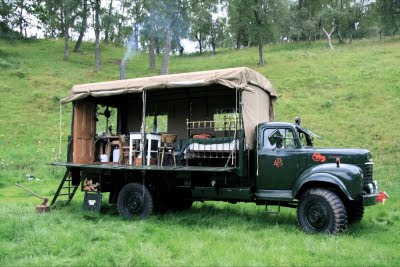 The strangest of them all, The Beer Moth is definitely an alternative resort that rivals no other. Not for the faint hearted, this converted 1956 fire truck is located in the Inshriach estate in the southern Highlands. The back of the truck actually serves as the guest room. A Victorian double bed, wood burning stove, a table and chairs make up the back of the truck, where guests and tourists have stays of up to six days. This is another glamping accommodation that’s perfect for those who want something out of the ordinary. The toilet and running water are available in the main house a short distance away, so no need to worry about totally roughing it.